KIRA tells a story to the boys of Bahay Parola 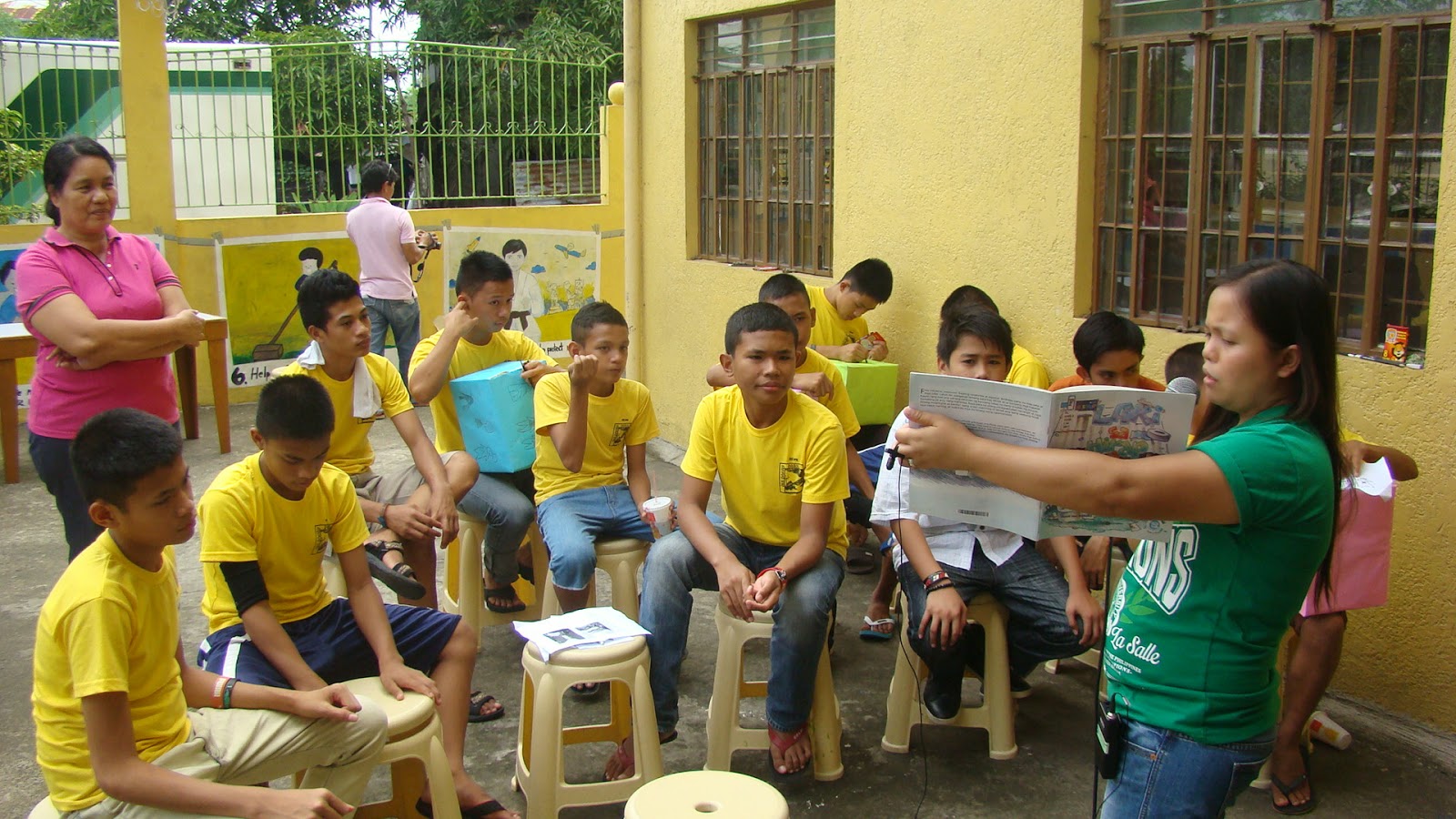 Children have an innate love of stories. Stories create magic and a sense of wonder. It is with these stories that we learn about life, ourselves and others. Storytelling is one way for children from all walks of life to develop an understanding, respect and appreciation for other cultures.  It can promote a positive attitude to people from different lands, races and religions.

Part of the DLSU Libraries’ Community Extension Program is ”KIRA Tells a Story.” These series of activities offers storytelling, puppet shows and film viewing sessions to children in day care centers, drop-in centers, orphanages and out-of-school youth or street children.  The objective of the project is to prepare children at a young age to listen and learn values through storytelling and to practice speaking skills through interactions with their peers and to ultimately promote lifelong love and appreciation of stories and reading.


Last 30 October 2014, members of the DLSU Libraries held the first of three scheduled Kira Tells a Story at the Mission to the World (Ang Bahay Parola) Grace Home for Boys in Bacoor, Cavite. Bahay  Parola endeavours in meeting the needs of the street children and children in need of special protection from Region IV-A and surrounding areas by providing a safe, loving and Christ-centered home environment.  Their programs include residential shelter and care for girls and boys; and psychosocial services among others.

On that day, the DLSU Librarians and staff were greeted by 17 young boys who were all very courteous and welcoming.  It seemed that they were all excited with the activities lined up for that day.  The first activity was a story-telling session with Ms. Julieta Olivar.  She had her costume ready for the book “Ako si Kidlat!” The boys enjoyed the story and also shared their insights about the book.  For the next activity, to involve the children more, the activity Comic Book Dice was done.   The boys were divided into four groups and each was given a dice.  Comic book dice is a sequential storytelling game wherein the boys will draw a different scenario featuring one, two, or all three characters on each face of their cube. (It’s effectively a single frame from a comic book). The characters can be anywhere, doing anything. The boys were instructed that they can use speech balloons or thought bubbles. The boys took their time in drawing their characters on their dice.  Some said that it is their first time to do this kind of activity while some said that they didn’t know that they can draw and come up with a story with the characters that they drew.  Some were even very creative with giving names to the characters of their stories.

During the sharing, the stories mirrored their interests, their value of friendship; love for animals and their love for play and recreation. Each group has their own stories to tell, and from the stories they shared, you can sense that these children aims to build a good future, no matter how hard their life is.  One of the boys even said that for them nothing is impossible.  The sharing was fun and emotional at times.  Before lunch break a book titled “Laki sa Hirap,” was read.  At first, reading the book was not considered but since the story is about the rising above hardship and poverty, it was decided that it will be read for the read-aloud session.  The boys fortunately enjoyed the book and readily shared their opinions.  Somehow they felt for the character of the book and the hope that it offered in the end.

While waiting for lunch, the boys watch RPG Metanoia, a locally produced animation movie.  At the struck of 12 noon, the group readied for a boodle fight, and the boys really enjoyed it, and according to them, it’s their first time to have experienced this kind of salu-salo.  To close that day’s activity the boys rendered a song and presented a hand crafted thank you card.

The fulfilment we had upon seeing their happy and thankful faces were overwhelming.  With this activity, as a librarian, in our own little ways, we were able to help and put a smile in their faces. The laughter and stories we shared would always remain in us as we go about in planning the next Kira Tells a Story activity. Seeing those smiles made us realized that the activity was worth the time and the effort.