Showing posts from February, 2022
Show all 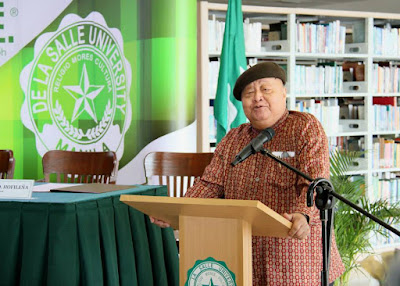 The De La Salle University Libraries is saddened by the passing of Francisco Sionil Jose on 06 January 2022. He was 97.  F. Sionil Jose during his collection turnover on July 11, 2014 Dr. F. Sionil José was a recipient of numerous awards from local and international award giving bodies, some of the highlights were the National Artist for Literature in 2001 and Ramon Magsaysay Award for Journalism, Literature, and Creative Communication Arts in 1980. He was also a recipient of the Pablo Neruda Centennial Award in Chile in 2004, and France’s Chevalier dans l’Ordre des Arts et Lettres in 2000. Manong Frankie, as he was fondly called, was the founder of the Philippine chapter of the international organization PEN (Poets, Playwrights, Essayists, Novelists). He was a Visiting Professor at De La Salle University’s Department of Literature and was conferred the Doctor of Philosophy in Humane Letters honoris causa by the university in 1995. F. Sio
Read more»
More posts