Showing posts from 2012
Show all

It has been the yearly tradition of the Library to recognize its employees that have rendered exemplary service to the academic community. Held every December, everybody looks forward to being part of the ceremony either as an awardee, a performer, a judge, a master of ceremonies, or a thrilled spectator of who are going to be the stars of the day. Barsaga, Alvarez as Best Dressed K-popper   With the year 2012 theme of  K-Popskuhan sa Aklatan,  a number of staff came to the awarding ceremonies on December 19 dressed in Korean-inspired costumes. Darling of the crowd Agnes Barsaga, who wore a “Go Ara” attire complete with sunglasses and scarf, won first prize as the Best Dressed K-popper, Female Category. Willian Frias, who dressed as Sandara Park look-alike was awarded second prize for the same category while Josephine Galleon with her sexy “Sistar” get up, placed third. Blue colored hair John Alvarez bagged first prize in the Best Dressed K-popper, Male Category, with Norman
Read more»

DLSU Librarian's research made it to a Turkish Journal

Joseph Yap, DLSU Librarian assigned at the Graduate School of Business, Makati Extension Campus (MEC), published his latest article titled,  “Technical Competencies of Medical and Health Librarians in a Library 2.0 Environment”  at the  Information World Journal  (Vol. 13, No. 2, 2012). The 22-page article was based on his Master's thesis at the University of the Philippines in Diliman.  The same research was also presented during the 4 th  Rizal Library International Conference in 2010, Quezon City, Philippines. The research determined the acquired knowledge, perceptions and attitudes of medical and health librarians in the Philippines on the impact of Library 2.0. The study verified the level of awareness and revealed the gaps among medical and health librarians in the use, creation and adaptation of Library 2.0 tools especially in informing, educating and empowering their users. Information World Journal  is a refereed open-access journal published by the University an
Read more» 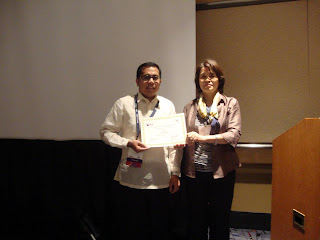 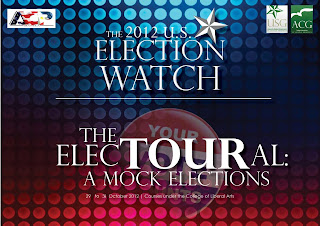 In line with the coming U.S Presidential Elections, American Corner – Manila in cooperation with the Arts College Government and University Student Government, organized a two-week long series of activities called, THE 2012 ELECTION WATCH which takes place from 25 October to 09 November 2012 with the end view of promoting and demonstrating democracy, through the U.S electoral process, as it play s a vital role in every society. To jumpstart these series of events, a lecture entitled, The Road To 270 , was interactively discussed by Mr. Al James Untalan, Faculty, International Studies Department on October 25, 2012. The talk clearly explained how voters elect a body called an electoral college , which would then elect the President. This system of government, practiced by America, embraces the idea of indirect democracy.
Read more»

As the Library continuously strive to offer quality service to the Academic Community, the Library now uses QR codes for easier data capture of information about the library and its other available resources. QR Code for the DLSU Webpage A QR (Quick Response) Code is a type of barcode that can be read instantly by any camera and Internet-ready mobile device (i.e., smartphones, Android, tablets, iOS such as iPad/iPhone/iPod). You may find a QR code embedded in the print handouts, pathfinders and postings available in the Library. At times, it is also pasted on video/DVD cases, linking the data to mobile-friendly video trailers. QR Codes for the DLSU library website, the OPAC and other LORA accounts in social media ( Facebook, Twitter and Skype ) are also available.
Read more» 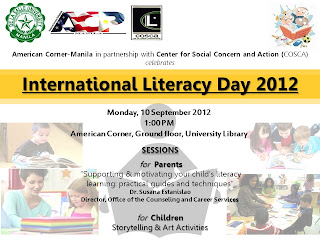 In the words of UNESCO Director General Irina Bokova, “Education brings sustainability to all the development goals, and literacy is the foundation of all learning.  It provides individuals with the skills to understand the world and shape it, to participate in democratic processes and have a voice, and also to strengthen their cultural identity.” Literacy, indeed, is the foundation of all learning.  It equips us with the essential skills needed for life.  With an army of educated people, our society can definitely meet the demands of these generations’ pressing needs for development. As we continue to affirm our commitment to contribute and support the educational needs of our community, American Corner-Manila in partnership with the Center for Social Concern and Action organized an outreach activity on the 10 th of September 2012.  Joining us in celebrating the day were the parents and children from Brgy. 704, Zone 77 of Malate, Manila.
Read more»