His Excellency Harry K. Thomas Jr. delivers his last talk as US Ambassador to the Philippines 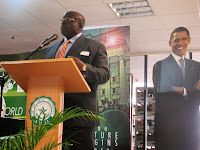 The outgoing Ambassador of the United States of America to the Philippines, H.E. Harry K. Thomas Jr. gladly shared his time for a last talk at the De La Salle University last July 23, 2013 on Realizing the Complexities of the 21st Century: Opportunities and Challenges of Philippine - U.S. Security Relations.

Joining with the Ambassador were Ms. Elizabeth Meza, Cultural Affairs Officer and Mr. Jeff Reppucci, both from the Embassy of the United States of America to the Philippines. Also present to the event were Dr. Julio C. Teehankee, Dean of the College of Liberal Arts; Dr. Dennis D. Trinidad, Chair of the International Studies Department and Dr. Renato C. De Castro, Coordinator, American Studies Program with the rest of the faculty members from the International Studies Department.

The Ambassador profoundly gave his viewpoints regarding the relationship of the US and the Philippines firmly expounding on how the US remains an ally of the Philippines. He further challenged the students by dreaming big for their country and that decision to move forward rests with the Filipinos.


The Lasallian community, specifically the International Studies Department, American Corner Manila and The Organization of the American Studies, expressed their deepest thanks to the Ambassador for the great partnerships and support from the U.S Embassy that transpired during his term.