Get to know Yugosto Balbas 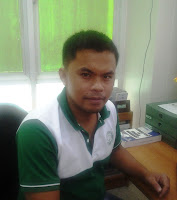 The Library welcomes Yugosto Alejo Balbas as the new librarian for the College Library at the Science and Technology Complex, Biñan, Laguna.

Yong, as family and friends call him, is not so new to the university libraries as he started working for DLSU, January of 2001 as a contractual clerk at the Filipiniana and Circulation Reserve Section. It was not a surprise that in April 2002, Yong got his permanency after passing the six (6) months probationary period. It was the start of his romance with the library science world.


Cliché as it may seem, Yong is small but terrible. Father to two cute little girls, Anne and Alia and a loving husband to wife, April, Yong is the epitome of a family man who wants the best for his family. He always look forward to learning new things and strives to find opportunities for growth in his career. Being a team player, he’s always willing to share his ideas and skills to his colleagues to facilitate the improvement of the services of the section he belongs to.

In his journey in improving himself and pursuing his dreams, he decided to further his studies in Library Science at the Philippine Normal University and in 2004 he successfully finished the program. Unfortunately, because of new rules and provisions in the Philippine Librarianship Law his specialization in library science was not enough to qualify him to take the licensure examination for librarians. Yong, instead of losing hope, decided to enroll for a degree on Masters of Library and Information Science at the Polytechnic University of the Philippines. In 2012 he was able to finish the program and successfully defended his thesis titled, Assessment of Book Loan Policy of De La Salle University Library towards Book Loan Delinquency Minimization. It was in November 2012 that Yong passed the licensure examination for librarians.

After 10 years of his good service as Co-Academic Personnel, Yong was reclassified as Academic Service Faculty this AY2013-2014. As Eleanor Roosevelt said, “The future belongs to those who believe in the beauty of their dreams.” Yong feels like he is living a dream.