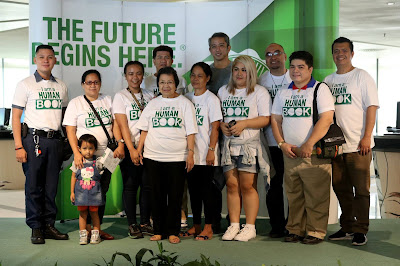 Humayo siya’t nagpakarami  by Ms. Jhoan Dela Vega. Now that she is 40 and a grandma of 2, Jhoan looks back to the small family where she was from. She has 3 siblings. Since age 19 with her childhood sweetheart-turned-husband, Jhoan enjoys her activities raising a brood of 10 offsprings. How happy could it be with a lot of “mini-me’s”?

Gilbert, batang ama  by Mr. Gilbert Madriaga. Could a man bear 4 kids without a woman? That’s impossibly possible for Gilbert. Having relationships with 2 women in the past, he makes it sure that the kids would under be his custody until now. This superman carried the usual woman world of childrearing and successfully raised a chef, a police officer, a casino dealer and a student. How superb is that?

Dalagang Ina: Ang mga pagsubok sa buhay ni Espie  by Ms. Esperanza De Luna. A considerably adventurous and independent life is what Esperanza has after she got away from three wed-locking attempts. She is a champion in raising security officer and a seaman alone while she do the laundry of neighbors and friends. Security is what she is after of a relationship. At 54, she is now happy and gracefully aging amidst the challenges she is facing.Priest - Archivist on Wheels by. Fr. John Paul H. Avila. Known to be cheerful and jolly by his friends, JP somehow guises himself as one of the lay Catholics. He can hardly be known as a priest. JP is an archivist by profession who is fond of singing and travelling with his bike.

Truth Behind The “Sins” by Ms. Jeeffa U. Acmat. Jeeffa is a student taking up Library Science and Organization at The National Teachers’ College, Manila. She is known to have a cheerful disposition by her friends and colleagues. A not so typical Muslim teenager as she describe herself, behind the vivid colors of the piece of fabric she uses lies the secrets of the youthful Jeeffa.

Start it with Why by Ms. Lelaii Garcia. Being a different person each day might be easy and normal to some. But it’s not as easy as combining a patty and bun for Lelaii. Years previous to what she is now, she had a hard time adjusting on how to project herself to the others. Lelaii’s story proves that to have a personality disorder need not mean to not succeed in life.

Gwapolis by PO1 John Clark Lorilla.  At a quick glance you’ll find him talking with people, conversing with them as if they have known each other so well. John Clark, or some others would call him Gwapolis (truncated form of Gwapong Pulis), works as a community relations police at MPD Station 7. He is a graduate of a business program and have worked in the business process outsourcing industry before he joined PNP.

88-11-1 by Mr. Juanito Victor Remulla. A roller coaster politician life is what Juanito has. Coming from a clan of politicians, Junvic continues to be of service to his constituents continuing the legacy his forebearers have established. This man of dedication made it to charts having been given the title “People of the Year” by People Asia Magazine in 2013. Junvic is an alumni of DLSU in grade school and continued schooling in ADMU and UP Diliman in his secondary and tertiary studies respectively. He was selected in several posts as provincial board member, vice governor and governor in Cavite where he married his better half Dr. Agnes Tirona Remulla. They are blessed with five (5) children; Katherine, Rossanna, Andres, Stella and Santiago.

Teacher by Experience by Ms. Etta Rosales. Etta Rosales is a household name for human rights advocates. She is a teacher, activist and a politician who frequented the house of representatives her being the party-list representative of the Akbayan Citizens’ Action Party for 4 consecutive Congresses (11-14th). Listen to the sound of heartstrings that sound for human rights.

Pen and Paper by Mr. Francis Donnel P. Decena. Feeling the air on mood swings is not as easy as riding a swing in the park. This is what Francis faces everyday. He is a senior manager in one of the country’s real-estate giants and has expertise in BPO, real estate sales and marketing, banking and finance and many others. Run through the personal pages of fleeting feelings and emotions.

Nothing is impossible by Mr. Gilbert Anonuevo. Impossible is possible for Gilbert, a resident of Las Piñas City, married with three children. A dependent to illegal drugs was him before he witnessed and experienced the light of renewal. Read a church-assisted metanoia through his story.


Ms. Etta Rosales, who gave the response on behalf of the human books expressed her appreciation of the human library event and thanking the committee for the opportunity to be part of the Human Library.