Understanding our Race and Ethnicity: The Human Library Focuses on the Filipino-Chinese

October 02, 2015
On its continued efforts to reduce discrimination and breaking stereotypes, the third session of the human library was successfully held last September 29, 2015 at the European Documentation Centre, The Learning Commons, 13/f Henry Sy Sr. Hall. The session’s theme is entitled “Negotiating Identities: The Filipino-Chinese Amongst Us.”  This activity is in partnership with the Chinese Corner and the De La Salle Alumni Association - CLA Chapter.

An inspirational message in Chinese language was delivered by Mr. Rodrigo Wong, Jr., DLSAA CLA Board Member, which was translated in English language by Mr. Dane So from ENGLICOM. In his message, Mr. Wong told that stories came from our memories and that memory is a good source of an oral history. He added that “the human library project wants to relive memories, to narrate experience [and] to tell untold stories.” In her opening remarks, Dr. Maria Caridad H. Tarroja, Director of the Social Development Research Center commended the Libraries for this important endeavor as a source of an alternative learning experience.

Nine human books arrived and were briefly introduced. Below are their human book titles with their corresponding descriptions. 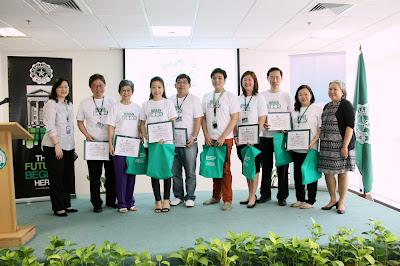 A BRIDGE BUILDER'S 45 YEARS OF JOURNEY by Teresita Ang See. She has been a social activist, educator, cultural worker and author throughout her adult life. As the founding president of Kaisa Para Sa Kaunlaran, she has made outstanding contributions to peace and social cohesion for the past 40 years. She is a community leader, a peace and anti-crime advocate, and a fearless spokesperson of the Tsinoys. This work, Ms. Ang See admits, she does out of personal choice. Through her advocacies and writings, she has positively influenced understanding and knowledge of the true role of the Tsinoys in mainstream society, effectively changing attitudes and promoting better relations between Filipinos and their fellow Tsinoy brothers.

BANKING ISN’T JUST A MAN’S WORLD by Bea Teh-Tan. Described as a "homegrown talent", Cristina “Bea” Teh-Tan is the current Managing Director and Consumer Business Manager for the Philippines at Citigroup Inc. This notable woman has made a name in the management of the marketing and sales functions for the credit cards business locally and abroad. Citi launched a number of award-winning products under her leadership. She was also recognized as one of the most promising young talent in the financial services industry by The Asian Banker and was awarded as one of the best bankers under the age of 40 in Asia Pacific and Gulf Region in 2008. Ms. Teh-Tan graduated from De La Salle University with a Bachelor's degree in Commerce, major in Economics and Business Management.

PASSION FOR FASHION by Ailene Co. Ailene Co’s years of experience in the fields of sales, operations and marketing made her earn her current post as Associate Vice President for Operations and Marketing at CK Fashion Forum, SM Retail Inc. Her extensive knowledge in fashion industry and in running the business makes her an asset of the company. Ms. Co finished her BS in Business Administration major in Management degree at the Philippine School of Business Administration. In 2009, she completed her Basic Pattern Maker course at the Fashion Institute of the Philippines.

TO BE YOUNG AND WISE by Fj Chua. He is a student at De La Salle University currently taking up ISJ-ADV. During his senior year in high school, he was a student assistant at Grace Christian College and until today, he is the Managing Editor of their class yearbook. Mr. Chua’s family owns a fashion for women store in Greenhills Shopping Center. This and his love for music and Korean pop culture inspired him to start his own business at the young age of 16. At present, he has an online shop selling KPop game cards.

HONOR THY FATHER by Edison Go. Mr. Go is an owner of a kebab and shawarma dine in Quezon City. He started making capital from selling high-end speakers and other gadgets. Having been brought up by authoritarian full-blooded Chinese parents himself, Mr. Go admits that he adopted this style of parenting in rearing his two sons and only daughter. While some see him as a strict parent, he believes that he is only following Chinese traditions which molded him as a person.

THE GREEN ARCHER’S GAME  by Jeron Alvin Teng. Born to a family of basketball players and lovers, Jeron Teng takes after his father and brother when it comes to his passion for the game. As a high school student, he won the season MVP award in all of his seasons throughout his high school career with the Xavier Golden Stallions. Definitely, bigger things were yet to come for him when he decided to be part of the De La Salle Green Archers in college. His major career success to date would be his UAAP Season 76 Finals MVP award. During regular school days, however, Mr. Teng is a Bachelor of Arts Major in Behavioral Sciences-Bachelor of Science in Marketing Management student in DLSU, trying to balance study and play.

THE ICING OF MY LIFE  by Penk Tan-Ching. She is a renowned pastry chef, world-class cake master, and owner of Pastry Bin. In 2000, she has been awarded as the Outstanding Small & Medium Scale Entrepreneur Award by the Federation of Filipino-Chinese Chambers of Commerce & Industry. Chef Penk is known for her memorable creations - President Benigno Simeon 'Noynoy' Aquino III’s inaugural cake and Beijing Olympic Bird’s nest cake to name a few. When creating her original cake designs, she gets inspiration from museums, and fabric houses, or when traveling.

READING THE WRITER by Wilson Lee Flores. Mr. Flores is a multi-awarded writer, college teacher and self-made real estate entrepreneur. He has won a record 12 Catholic Mass Media Awards (CMMA) for "Best Opinion Column", "Best Business Column" & others for his regular "Philippine Star" columns. He has also won three Palanca literary awards. More interestingly, he has become a baker by buying the now 76-year-old, artisanal and pugon-style Kamuning Bakery Cafe in Quezon City in December 2013 and starting to revive it in 2014.

THE CHAIRMAN, THE PRESIDENT, THE CEO by George Siy. He is Anvil Business Club's chairman emeritus and the president and CEO of Marie France. Being in the personal care business for years, he is an expert in business models and the practical ways to select, develop, and evolve them to achieve success in different fields. He also has a wide experience in different industries from reading and testing different models in manufacturing, retail, real estate, technology, and software. Aside from business, Mr. Siy is also very well-versed in culture and history.

Ms. Teresita Ang See gave the response on behalf of all the human books. She noted that the human library provides a mutual understanding between the human books and readers.  Dr. Laurene Chua-Garcia, Chair of the Psychology Department gave the closing remarks. She reminded the audience that all of us are part of this new age that recognizes everyone as equal partners. The event was attended and supported by the Associate Vice Chancellor for Academic Services, Ms. Kai Shan L. Fernandez.