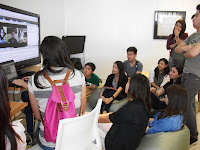 The American Corner Manila joined a live video webchat last July 24, 2013 from CO.NX, a digital diplomacy team with the Bureau of International Information Programs (IIP) at the U.S. Department of State.

The central theme for the session is about, “Islam in America” with Imam Khalid Latif, University Chaplain, New York University (NYU). He is the first Muslim appointed chaplain at NYU and is deeply committed to interfaith dialogue and an exemplary Muslim in a modern, multicultural world.

Students participating in the live webchat eagerly asked about the extent on which they can practice their religion in the US. Questions relating to the various ways of celebrating the Ramadan were also asked.

The conversation can also be followed on Twitter through hashtag #Ramadan and @KLatif.