Get to know Candy May Schijf 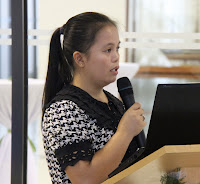 Candy May Nabaunag-Schijf is one of the newest additions to the DLSU Library’s pool of librarians. She is currently the Preschool Librarian assigned at the Science and Technology Complex Integrated School in Biñan, Laguna. Candy graduated from Saint Louis University (SLU) and earned a Bachelor’s Degree in Secondary Education, Major in Library Science (2002).

Contrary to the “serious” stereotype that often dogs most librarians, Candy is quite a comedian when she is surrounded by family and close friends. She always has a few tricks up her sleeves and says the funniest things that make her more endearing to the people who know her well. But beyond the wisecracks is a strong, loving, and loyal person who never ceases to amaze people. Small though she may be, Candy is never daunted by heights or new experiences. She loves travel adventures, which often include climbing mountains, exploring caves, and bathing in waterfalls. “Adventure is out there!” is her favorite line. And she really means it.

The little girl from Baguio

Having a carpenter as a father, Candy dreamed of becoming a successful architect and hoped to fulfill her father’s aspiration of becoming one. It was not until she reached her university years that she decided to take a fork in the road and study Library Science. It was the beginning of an adventure. She soon realized that what started out as a half-hearted decision turned out to be one of the best choices she had made, as it brought her better opportunities, which soon led her to live some of the best experiences and meet some of the most wonderful people in her life today.

Candy stands 4 feet and 11 inches tall. She may strike anyone as a mere little girl who can easily fall prey to the big bad world, but Candy is anything but a “damsel in distress.” After serving as a working student at the SLU to pay for her school fees, as soon as she got her degree in 2002, she worked for almost 4 years at the University of Baguio (UB). Despite her meager income, she helped support her father and her younger sister, who also graduated from SLU with a degree in Library Science. She believes that her experience in handling the General Collection Section of the UB Library gave her the training and the strong foundation she needed in her career. After UB, she briefly worked as a Section Head Librarian in SLU’s Engineering and Architecture Library in 2005.

The little girl grows up

Always eager to push her limits in search of new opportunities to learn and grow, Candy decided to leave her home in Baguio City and brave the oftentimes chaotic life in Manila. She ventured into the non-profit sector when she found employment in the Asian Federation Against Involuntary Disappearances (AFAD) in 2006. Trained in the academic setting, AFAD, which is a human rights non-government organization, was a whole new world for Candy. She was thrust into social and political issues that made her become more aware and sensitive to the world’s history of human rights abuses that persist to this day. The position also broadened her skills and capacity, as she wore three different hats: Librarian, Documentation and Research Officer, and Publications Assistant. Moreover, the experience also brought her to see the world outside of her comfort zone, as she attended and organized a number of conferences and training courses on human rights here and abroad.

In late 2009, she decided to get a master’s degree in Library Science and, hence, enrolled at the Polytechnic University of the Philippines. It was then that she realized that she wanted to go back to being an academic librarian. This led her to resign from AFAD in May 2011 and work with the Global City Innovative College, where she stayed for a year. Later that year, in August 2012, she was hired as a contractual Catalog Librarian in the Technical Section of The DLSU Learning Commons. When a tenure position opened in the university library, she applied, and got the job.

Now, Candy feels like she has finally found her place. In DLSU, she hopes to build a healthier, more productive, driven, and happier career as an academic librarian. While her spirit is still as adventurous as ever, it has found its anchor and Candy hopes that this new home, which she has grown to love, would be a permanent one. Furthermore she hopes to share her knowledge and be one of the instruments of the DLSU Library in providing an environment that helps build a new way of learning for the Lasallian community.