February 14, 2022
The De La Salle University Libraries is saddened by the passing of Francisco Sionil Jose on 06 January 2022. He was 97.
Dr. F. Sionil José was a recipient of numerous awards from local and international award giving bodies, some of the highlights were the National Artist for Literature in 2001 and Ramon Magsaysay Award for Journalism, Literature, and Creative Communication Arts in 1980. He was also a recipient of the Pablo Neruda Centennial Award in Chile in 2004, and France’s Chevalier dans l’Ordre des Arts et Lettres in 2000.

Manong Frankie, as he was fondly called, was the founder of the Philippine chapter of the international organization PEN (Poets, Playwrights, Essayists, Novelists). He was a Visiting Professor at De La Salle University’s Department of Literature and was conferred the Doctor of Philosophy in Humane Letters honoris causa by the university in 1995.

F. Sionil Jose formally turned over his collection to the DLSU Libraries on July 11, 2014.  A total of 1,031 books are currently housed at the F. Sionil Jose Collection located at the Learning Commons, 12th floor, Henry Sy, Sr. Hall. The collection is composed of his complete works including manuscripts, published works, and articles. Other parts of the collection include publications by Solidaridad Publishing House, signed copies of books written by friends, and his selection of 100 recommended books. He is best known for his five novel masterpiece, the Rosales Saga, consisting of The Pretenders, Tree, My Brother, My Executioner, Mass, and Po-on.

In 2019,  the master storyteller engaged the youth in conversations with well-known personalities in various fields like literature, art, film and politics with the themes: Literature as History: The Philippine Revolutionary Tradition in the Rosales Saga, Fighting the Good Fight: Conversation with Conchita Carpio Morales, and Profile of the Filipino Soldier: The Battle of Marawi A Conversation with Scout Ranger Philip Fortuno and Lt. Col. Samuel Yunque.

Target participants were students and faculty from DLSU, other institutions, and enthusiasts. The National Artist engaged his audience with his magnificent storytelling skills  that inspired  them to adopt a habit of lifelong reading and advised writers to “be true to yourself”. His great motivation as a writer  is “my consciousness of the great challenges that we as a people face. The inequality, and the poverty, the apathy and the ignorance – these seemingly insurmountable obstructions to the creation of a just and sovereign nation.” These notions captivated and motivated the audience to be literate and become future writers and lovers of literature. Aligned with the F. Sionil Jose kind of motivation and passion to find “solid facts”, writing skills and story telling enjoins The Libraries in its mission to “Make every Lasallian information literate”.

The DLSU Libraries extends its deepest sympathy to the Jose Family. A huge loss to the world of Philippine Literature. We will surely miss “"Manong Frankie," or "Old Man Frankie” with his trademark beret. He will be remembered as a Filipino writer who writes stories and believes in them. 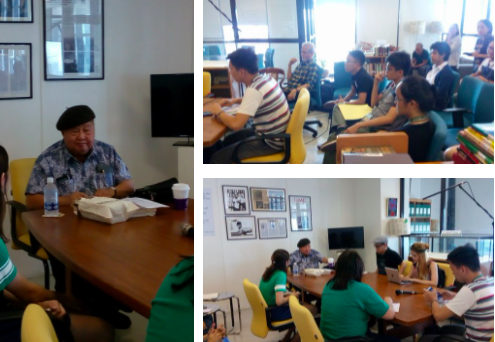 During Dialogue with F. Sionil Jose on Obscenity and Censorship in Literature on April 8, 2016

During the CONVERSATIONS WITH F. SIONIL JOSE with the theme Literature as History: The Philippine Revolutionary Tradition in the Rosales Saga with the exhibition of F. Sionil Jose.works and mementos 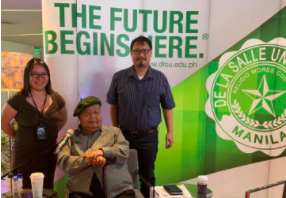 Our National Artist for Literature, F. Sionil Jose together with our moderator for the day, 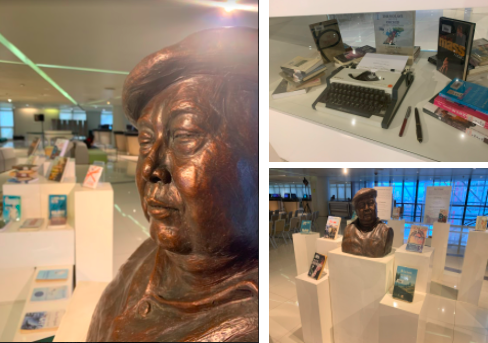 .Exhibition of FSJ works and mementos