Last 28 October 2020, the Libraries launched Animo Repository, a cloud-based institutional repository (IR), powered by Digital Commons, to serve as a one-stop platform to collect, preserve and disseminate the scholarly and creative works of the faculty, students, and researchers of the De La Salle University (DLSU). 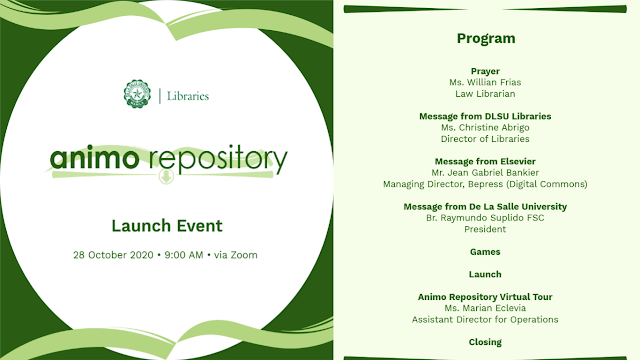 The event was attended by DLSU administrators, faculty and staff  led by Br. Raymundo Suplido, FSC. Partners from Elsevier and Digital Commons led by Mr. Jean Gabriel Bankier, as well librarians from other universities, also participated in the virtual launch.

The DLSU Libraries recognizes its role as a knowledge hub for scholarly engagement and digital scholarship. With this in mind, it continues to innovate and reinvent things in the library to better support the Lasallian researchers in their bigger and more meaningful mission to the country and the world. The establishment of the Animo Repository is the Libraries contribution not only the Lasallian community but also to the library community in the country.

The main purpose of the Animo Repository is to expand DLSU's research visibility. In her message, Ms. Christine Abrigo said that the Libraries is moving beyond keeping things curatorial and thus beyond preservation. Preservation, she pointed out, is about accessibility and promotion of scholarly communication. Animo Repository is designed to make the scholarly works of the DLSU community accessible to a wider audience. With the increased visibility, it provides researchers opportunities for collaboration within or outside of academia.

Apart from serving as single location to locate and access the scholarly publications of DLSU researchers, the Animo Repository will also feature the library's archival and special collections. Furthermore, it also offers infrastructure that supports data management, journal publishing and even open education initiatives. 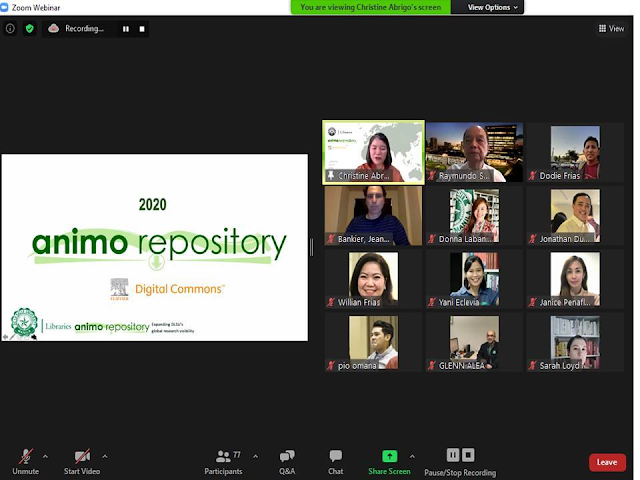