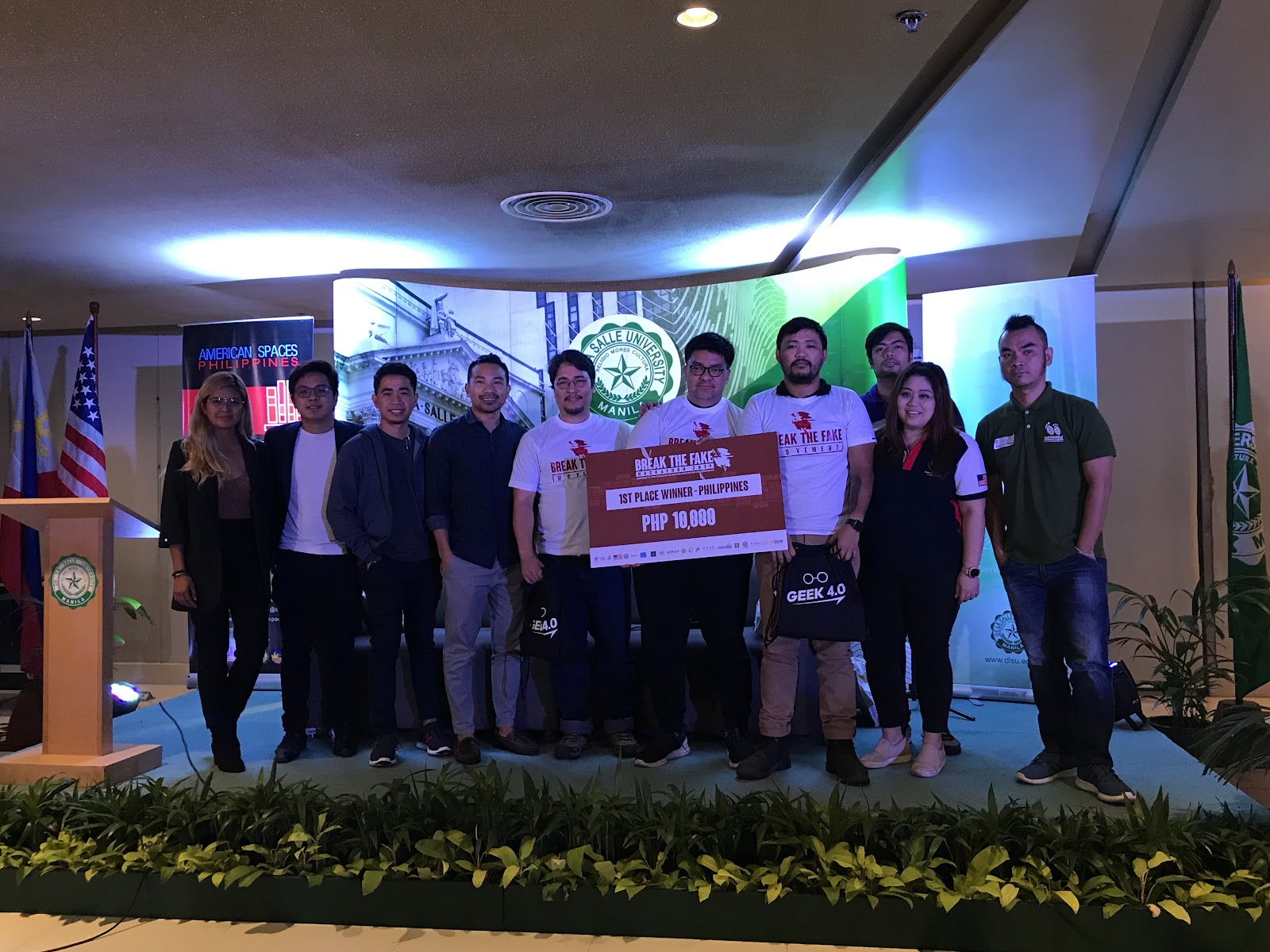 Manila, Philippines - Five or so years ago, “fake news” was a term that no one used. Today, it’s no longer just a term, but a phenomenon, recognized as an urgent global problem and a threat to human life by world leaders and institutions.

The rise of social media as the main source of news and information by most has made it easier for malicious figures and groups to spread false content, especially in tech-savvy Southeast Asia.

This led a group of independent youth leaders and professionals in Manila, Philippines to start the “Break the Fake Movement”, an organization that aims to engage the public, especially the youth, through technology-driven media literacy events to combat fake news.

“Fake news is one of the most pressing issues facing the world today. It will take the ingenuity of our youth, combined with the power of technology, to put an end to this trend. We wanted to give them a forum to realize their solutions and mobilize them into action,” said Gabriel Billones Jr, the Lead Organizer of Break the Fake Movement.

For this year, the organization launched the “Break the Fake Hackathon”, a three-city event that challenges programmers and developers to create systems that will help institutions battle disinformation.

Filipino students and professionals had the chance to join the competition and showcase their talents last August 17 at American Corner Manila in De La Salle University, where the top three winning teams had the chance to go home with P10,000, P5,000, and  P5,000 respectively. More information on the mechanics of the event may be found here.

Each team only had 5 minutes to pitch their creation, and had 3 minutes to answer the judges’ questions.

This year’s 1st-place winners are Carlos Nazareno, Dominic Ligot, Nikko Torcita (left to right) from Team Troglodyte, who are graduates from Ateneo de Manila University, De La Salle University Manila, and University of the Philippines Diliman respectively. They were able to create a network graph to track purveyors of disinformation by mapping out the relationships of fake news websites with each other. The team also brought their prototype that they showed the judges during their pitch.

“The network graph proposed by Team Troglodyte is truly innovative. By mapping out the web of fake news sites - which have figurative and literal links to one another - we can also begin to separate these sources from legitimate outlets and publications. Separating the two will undoubtedly lift the quality of public discourse,” said Sofia Galve, a co-founder of Ambidextr, one of the partners for Break The Fake.

The other winners, Team Git Stash and Team GigaMike, won 2nd and 3rd-place respectively. Team Git Stash created a web browser extension that bridged the gap between users and fact-checking organizations, while Team GigaMike created an app that gives bloggers a badge that detects fake news.

Technology for Social Good
The event first made its stop in Jakarta, Indonesia in June and held the second outing in Kuala Lumpur, Malaysia in July. The Manila leg is the last stop of the event. Participants are encouraged to develop a multitude of possible solutions for fake news, including everything from an online database of fake news sites and an anti-fake news content portal to more niche solutions, like an app that identifies whether an applicant’s credentials are true or a mapping tool that maps traffic sources of a social sentiment in an online platform.

Devcon, an organization dedicated to professionalizing Filipino IT professionals, is partnered with Break the Fake for the hackathon.

“Many people associate innovation with just websites and apps. But technology is so much more than that. Just as the previous generation of innovators has worked to keep our data, privacy, and identify safe from cyber criminals, the next will be tasked with ensuring the integrity of our news and information. We’re proud to encourage solutions in this endeavor,” said Devcon founder and president Winston Damarillo, who is a serial entrepreneur and  CEO of Amihan Global Strategies.

The winning teams from each of the three cities will then compete in the Grand Hackathon that will be held on the second week of September in Manila, Philippines, where they will have the chance to win Php100,000 worth of prizes.

The winners will also be given opportunities to pitch their programs to potential investors, visit the country offices of some of the region’s biggest companies, and get mentorship from local entrepreneurs and professionals, and consultancy from marketing and events management company, Ambidextr.

The Hackathon was made possible through the generous grant awarded by the Young Southeast Asian Leaders Initiative (YSEALI) Seeds for the Future program of the US government, in cooperation with Cultural Vistas. Launched in 2013, YSEALI is the signature program of the United States to strengthen youth leadership in the region.

The “Break the Fake Hackathon” was among the 21 winners of the small grants competition, where they received grants ranging from $4,000 to $15,000. The winners emerged as most deserving from the 400 applications the organization received in Southeast Asia.

For more information and updates, check the organization’s Facebook page at www.facebook.com/breakthefakeph.

Sponsored by the US Department of State, American Corner Manila is only one of the many American corners worldwide.