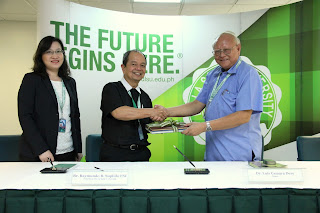 Dr. Luis Camara Dery, a noted historian and professor at the History Department of the De La Salle University, formally handed over to the Libraries his personal papers, published books and manuscripts on 21 September 2015 at the EDC Multipurpose Room, The Learning Commons, 13F HSSH. This unique collection was donated to the Libraries to ensure its survival for future generation of historians.

Dr. Dery specializes on Philippine political and socio-cultural history from pre-colonial period to World War II. Most of his works have been published in various national and international publications. As a respected historian, he became the President of the Philippine Historical Association in 2013 and 2014.

His collection includes rare Filipiniana publications about Jose P. Rizal during the Spanish period and the early Philippine Republic; local history of provinces; and a range of newspaper issues, school publications and other underground papers that were circulated during the Martial Law years. Some of his published works are Pestilence in the Philippines: A Social History of the Filipino People 1571-1800 (2006); Awit Kay Inang Bayan: Ang Larawan ng Pilipinas Ayon sa mga Tula't Kundiman na Kinatha Noong Panahon ng Himagsikan (2003); The Kris in Philippine History: A Study of the Impact of Moro Anti-Colonial Resistance, 1571-1896 (1997); Army of the First Philippine Republic and Other Historical Essays (1995); From Ibalon to Sorsogon: A Historical Survey of Sorsogon Province to 1905 (1991); and When the World Loved the Filipinos and Other Historical Essays (2006).

The turnover was attended by Br. Raymundo Suplido FSC, DLSU President, Ms. Kai Shan Fernandez, Associate Vice-Chancellor for Academic Services, Prof. Michael Chua, faculty members of the History Department, students and librarians. In his message to the University, Dr. Dery expressed his sincere gratitude to Br. Andrew Gonzalez FSC, former DLSU president who was instrumental in becoming a productive and research-oriented professor at the History Department.